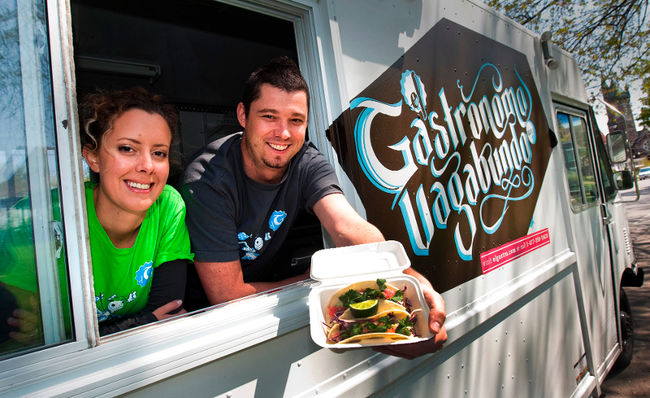 Following the concept of the successful gourmet food truck scene in LA, El Gastronomo Vagabundo recently launched at Flat Rock Cellars Winery in Jordan. It’s the first of its kind in this province, unlike any other food truck you may have encountered previously. No french fries, burgers, or hotdogs. Local ingredients the key focus with some traditional Asian influences, wrapped in tight shells, paired with wines from Flat Rock. Street food, dressed up, and it tastes damn good…

The people of LA have it good when it comes to food. There are numerous restaurants proudly announcing their support for all things local with an exorbitant amount of local produce to play with. There are restaurants like Animal that are confidently experimenting with cuisine. Then there’s the social media element with top chefs taking to Food trucks, announcing only on twitter where they’ll stop next and what they’ll be serving. From gourmet cupcakes to delicious Korean bbq tacos and pulled pork sandwiches, it’s a haven for any foodie, and it’s cheap!. Jealous much? Enter El Gastronomo Vagabundo.

The name may be difficult to remember, but the concept is so deliciously simple. Australian Chef Adam Hynam-Smith and his partner Tamara Jensen operate the el gastro vehicle. Everything is made to order and made in the truck. Chef tries to incorporate local ingredients whenever possible, and throws in his Asian inspirations to create a menu of gourmet snacks. It’s not fusion, but about clean ingredients, traditional Asian recipes and pairings. Currently the truck is parked at Flat Rock Cellars during the weekends, but soon it will be making appearances at various Food and Wine events in wine country. Similar to the LA food truck scene, Adam and Tamara are using social networks like Twitter to announce weekly menus and event locations.

“Basically we wanted to make really good food, in a non pretentious way. It’s meant to be casual, it’s meant to be fun. Come here, take your shoes off and walk around, relax, eat and drink.” Chef Hynam-Smith.

Chef has been all over the world, working with Michelin star chefs like Jacques Raymond and learning about Moroccan and middle eastern flavours from Cath Claringbold (MECCA). He arrived in Canada after meeting his partner Tamara in Spain. While getting his feet wet in the culinary landscape, he saw what was going on in the west coast with food trucks. The pair decided to launch their own mobile food operation. El Gastro catered their first event at Flat Rock Cellars and immediately there was synergy with food and wine.

The launch menu included a delicious microgreen heirloom salad with colourful tomatoes from Tree and Twig in Wellandport. As I explored the plate, I found mouse melons, bits of goat cheese, dill, a beet chip and reptile radish. Brought together by some thai basil dressing and fleur de sel. Suggested pairing, a crisp clean 2009 Nadja Riesling from Flat Rock (New Release, $20.15). A Thai coconut curry beef short rib followed. The curry paste was prepared from scratch, the dish finished off with lime juice and shallots. This was one of my favourites, paired with the Chard-Gewurtz-Riesling blend 2008 Twisted ($17.15).

Warm mozzarella oozed out of its tempura shell after the first bite, creaminess with avocado and basil mayonnaise. The oak aged 2007 Chardonnay ($17.15) complimented the creaminess in the taco. Then a plate that took me back to my teen years. Something I remembered from the streets of Colombo, and Bangkok. A spiced fruit platter. A plate of tropical fruits (some local apricots and peaches as well) served with a bowl of dried shrimp, sugar, salt and chili. It’s a nod to South East Asian street food, the first bite a surprise to the palate, but quickly addictive. It’s how my grandmother used to eat her mangoes, and I’ve never forgotten that taste. Paired with a glass of 2009 Riesling ($17.15).

El Gastro’s menu changes weekly and is tightly dictated by the availability of local ingredients. While chef doesn’t limit his creativity by local produce, he tries to maintain a sense of local awareness in his food whenever possible. What you can expect, a simple approachable menu where a variety of ingredients are presented in easy to eat Taco shells.