This is what I’m thinking about as I start my day cutting scallions on the El Gastro Vagabundo truck with co-owners chef Adam Hynam-Smith and operations manager Tamara Jensen. The experience was set up by Spotlight’s publisher, Suresh Doss, who has become one of the principal organisers behind the food truck movement in Toronto. Ive eaten most of the street food available in Toronto but this will be my first time on a truck.

If you’ve spent time with Adam (as I have) you know he’s an exceptionally friendly guy who is the first to admit he has absolutely no filter on the wordsinflected with Aussie slangthat come out of his mouth. From his coffee order (“long black” is roughly a long double-shot of espresso) to Melbourne’s best perving spots (hyper-honest Aussie for “people watching”) we get an entertaining and uncensored view into the chef’s mind and his iPhone photos.

As Adam moves me from slicing scallions to beef cheeks I see his complementary, exacting side. Somehow, he manages to spot the one time I’m distracted and cut a couple slices half as thickly as he wanted. He applies this rigor to himself equally and the one time he really gets angry before service is when he finds that he’s forgotten the ice for the iced tea.

Everyone on the truck is just as exact, even fanatical, about cleanliness. As I turn away to wash my knife and cutting board Trevor Janisse immediately jumps in with paper towel to vigorously scrub my station clean. During service the sanitising spray is always within his reach. 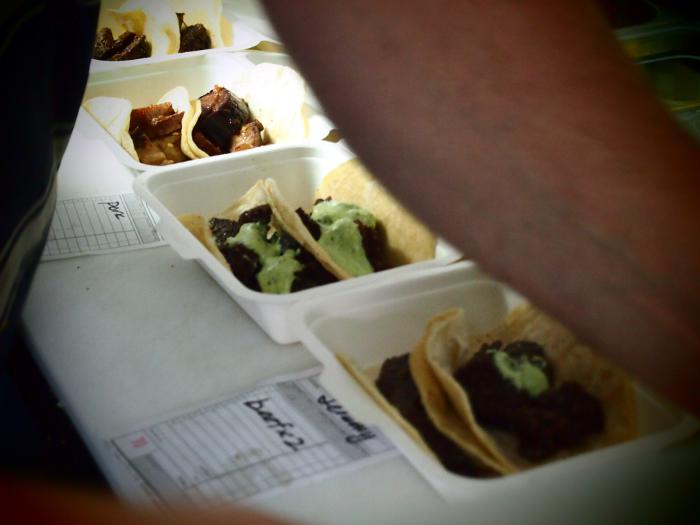 Once service starts I’m assigned to be the runner with the shortest route in food-service history: taking finished dishes from Trevor and turning to pass them to Tam without really moving my feet. Also I pour iced tea like a champ.

We can’t really go any further without describing the food. We start with two tacos on the menu: one pork belly with pineapple, the other beef cheek with cabbage. There’s also a salad, cheekily named The Spanish Inquisitionit’s got both Israeli couscous and chorizo sausage. High-end interpretations of fried potato wedges and wings replace the tacos as we run through the giant supply of meat.

And here Samantha Robbins and Jennifer Hall, the two cooks working at Adam’s side, get another lesson in Aussie slang. The salty, crunchy bits of meat left in the bottom of the bowl, a sort of macro-fond, are known as “nor” and taken together make an excellent taco.

A food truck definitely does not have the most comfortable of kitchens. It’s hot near the deep-fryer and griddle but freezing cold by the window. Space is so tight that I feel I should be calling “behind” when I turn to cough. Everything that spends more than an hour on the truck smells lastingly of the deep fryer. Adam and Tam are engaged and I have to marvel at how smoothly they get along in such a cramped space.

Without being what I’d think of as really crazy, service is steady. On the two occasions that I get to turn ninety degrees, take a couple steps, and look out the front window I can see what looks like an endless line of U of T students waiting patiently in the drizzle. Once at the window they’re in Tam’s capable hands. She disarms the impatient with a sunshine smile, firmly manages the no-substitutions policy, all while handling the flow of finished orders that I’m passing to her from one side and Adam on the other calling for her to “upsell the wedges” to customers who have had twenty minutes to plan their order.

I notice from the names on the tickets that stand out (like Lilabecause, you know, we’re in the back of what could have been an ice truck in an early episode of Dexter) that once customers have ordered and paid the wait for their food is about five minutes, definitely less than ten.

When things get busy Trevor pulls me over and has me garnish the tacos with cilantro (sorry, coriander) and one of those wedges of lime I cut earlier, as well as assemble the salads. We can do a vegetarian option if we omit the chorizo from the Spanish Inquisition. At some point I must have dropped the ball because a customer comes back to the window looking for his sausage. (That or a soft vegetarian had second thoughts about his faith.) Adam is not a happy chef.

By the end of service, I think,  things are forgiven and Tam and Adam seem happy. We’ve gone through just over 200 chits (most are singles but a couple are up to six items) and never really got backed up. On Twitter Adam calls me a “hard yakka” which I gather from this video is a good, if campy, thing. Best of all, I still have all my fingers.