Cheese is in my top 5 foods I would have a hard time living without. And of course what goes better with cheese than wine? Having lived in France for close to 6 years, I was spoiled for choice (for both) and didnʼt realize it until I moved to Toronto in 2000. One of those cases of not really appreciating what you have until you donʼt have it anymore… I am pleased to say that over the past decade, great Canadian cheese and wine have slowly become the norm instead of theexception in this city I call home and last weekend, I was fortunate enough to attend the Salut Wine and Cheese Seminar sponsored by The Dairy Farmers of Canada and Rosewood Estates Winery.

The event paired six Canadian (Ontario and Québec) cheeses with wines (and two meads!) from Rosewood Estates. For someone who typically enjoys all wine and cheese pairings (!), it really helped me think about flavours, aromas and what pairs well and why. We started out with the cheekily named Figaro, a soft ripened cowʼs milk cheese from Glengarry Fine Cheese in Lancaster, Ontario that dances tangily on your tongue.

Named for the French daily Le Figaro that the cheesemaker found herself reading on a flight home from France where she was learning the art of cheeesemaking. Paired with a zingy 2008 Süssreserve Riesling with notes of lemon and lime, this was a wonderful palate-opening starting combination. Any dish with notes of lemon (risotto or a schnitzel served with lemon wedges) would benefit from pairing with this Riesling.

Next cheese up was my sister and tasting companionʼs favourite the Saint Paulin from Damafro Inc (Saint-Damase, Québec). A semi-soft cheese with a buttery and creamy texture and slight acidity, this was a cheese I ate often living in France. My sister thought it would make a killer grilled cheese… This was paired with the 2001 Semillon Sauvignon Blanc a blend of 85% Semillon and 15% Sauvignon Blanc with zesty tones that balanced the creaminess of the cheese. Our third offering was the Fleur-en-Lait, also from Glengarry Fine Cheese. 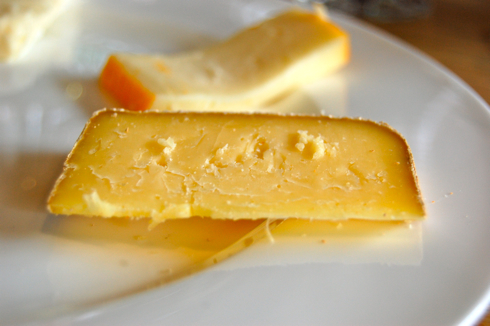 This semi-soft washed rind cheese is aged for a minimum of four months on pine boards and has a bright orange rind, which gives a very earthy flavour to the cheese (and is edible). Its grassiness was balanced by the 2008 Pinot Noir, rich in raspberries, sandalwood and mocha notes, from 10 monthsʼ aging in premium French oak barrels. I found this to be extremely drinkable not normally a big Pinot Noir fan but this was not overly tannin-heavy and more fruity than anything. Moving into the “heavier” and much more ruby coloured 2008 Merlot, I was pleased to taste coffee, cherries and plums. A lingering taste of berries on your tongue was a spectacular combination with the Chocolate Cheese Fudge by Pine River Cheese and Butter Co-op in Ripley, Ontario.

Ok, I admit we were both skeptical about this. It looked much more like fudge than cheese and whilst I am a fudge fan (especially with a lovely rich fruity glass of red), I wasnʼt convinced this would work. Itʼs made by chopping Havarti cheese in a food processor and mixing in other ingredients (i.e. dark cocoa in this case) until it is a spreadable consistency. It actually tasted a lot like a chocolate coeur à la crème, which is basically cream cheese mixed with melted chocolate and cream (and which we used to eat at alarming rates when we were growing up!). I struggled to find the cheese flavours in this but enjoyed it a lot. Itʼs definitely at the “cream cheese” end of the cheese spectrum and I can see this being a wonderful breakfast food…

Moving into the final stages of this wonderful dairy and fruit journey, we were presented with a lovely Maple Cheddar from Black River Cheeses in Milford, Ontario.

This medium-aged cheddar is combined with pure maple syrup and maple sugar from Fosterholm Farms in Prince Edward County. With its slightly crumbly texture, it would be an excellent dessert cheese on its own, and would also pair well with, say, an apple pie. This smelled like one of my favourite ingredients from childhood baking golden syrup and definitely a cheese I will be seeking out for a future dinner party.

Its wine pairing was the 2009 Mead Blanc honey wine blended with Gewürztraminer and aged in a stainless steel tank. I found this a little overwhelmingly cloying with strong notes of rose petals, spices and mandarin oranges, it was unfortunately a little too reminiscent of perfume for my liking.Even when I took a bite of the cheddar and a sip of the wine and made a “slurry” in my mouth, I found the rose aroma too much. I think itʼs definitely an acquired taste! My tastebuds were extremely happy to discover the final wine of the day and the second mead the 2007 Mon Cherie a blend of sour Niagara cherry juice and Rosewoodʼs local honey which creates a medium-dry mead much more suited to my palate. Chilled, this is recommended for consumption with chocolate desserts or a fruity meat dish such as pork tenderloin served with fruit chutney.

Personally, I thought it did extremely well with the Pine River 7 year-old Cheddar also from Pine River Cheese and Butter Co-op.

What I loved about this cheese was its creaminess. Normally with old cheddar, you expect some crumble factor. Not here. This had a soft, smooth and buttery texture yet retained the wonderful sharp bite you would expect of aged cheddar.

All in all, a wonderful afternoon spent discovering new favourites and reacquainting myself with some old ones. The Rosewood wines were wonderful partners to the cheeses and I was transported back my tiny Paris apartment where many a meal would consist of wine and cheese. If I had only known then what I know now about appropriate pairings! Thanks Dairy Farmers of Canada and Rosewood Estates for an education in cheese and grapes.

Mardi Michels is a full-time French teacher and part-time food blogger based in Toronto.  Her blog, eat.live.travel.write focuses on culinary adventures both near and far because she travels as often as she can!