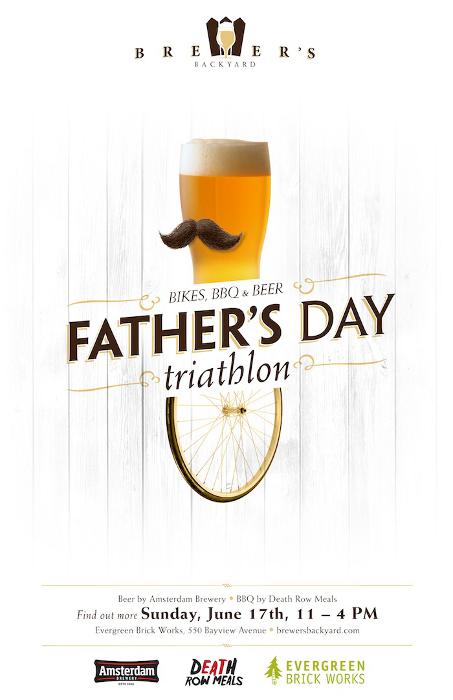 Cass Enright has taken his successful model of family-friendly, anti-festival beer events to the Evergreen Brick Works this summer. On six Sundays spread out from May to October a particular brewery (or a few) will pour their beers beside a food vendor selling their wares. Last year, the series was held in conjunction with The Stop, but they’ve decided to go in the proverbial other direction and have changed the name of their event to The Stops Beer Garden.

When I chatted by phone with Cass this week about the Brewers Backyard, he described his vision for the events as “people having a nice afternoon experience of drinking beer and having a good time.” The name, he says, comes from wanting to “instill the feeling in guests that theyre actually in the brewerys backyard.”

For Fathers Day, June 17th, Amsterdam Brewery is bringing a number of one-offs to add to their regular lineup of 416 Urban Wheat, Big Wheel, Boneshaker IPA, Natural Blonde, and Oranje Weiss. As well as a smoked porter, and a coffee beer they’ll also be pouring a farmhouse-style collaboration they’ve brewed just for OCB Week. I’m most excited for another shot at tasting the award-winning as of last weekend when it took a silver at the Canadian Brewing Awards Maverick and Gose that we sampled when we visited to chat about their barrel programme.

The start time for this month’s event has been nudged forward to 11 AM to coincide with the end of the Ride the Ravines 25km bike event that aims to raise support for accessible cycling in Toronto. The ride starts and ends at the Brick Works.

The third leg of the triathlon the foodwill be handled by vendors from the popular Death Row Meals pop-up supper club. Those with a meat tooth will be happy to read that Caplanskys is serving their bbq brisket sandwich sliders ($4 for one or a pair for $7) and chef Rossy Earle of SupiCucu will have a smoke lamp dip sandwich with roasted garlic mayo and a side of cassava potato chimichurri salad. Peter Minaki (of the popular-at-TUM Kalofagas Greek Food) is collaborating with Fisher Folk to bring a deep-fried haddock sandwich for the pescaterians and possiblity a veg option. Speaking of vegetarian options, Indian Rice Factory will be cooking a veg biryani made with Vickis Veggies produce.

The price for all food items will be no more than $10 a serving.

This Sundays event will go rain or shine (but, right now, the forecast looks great) in the Koerner Gardens at the Brick Works. For photos and my unrestrained praise see our coverage of the beer at last weekends TUM that was held there as well.

There is quite a lot of parking at the Brick Works (but who drives to a beer event?), the 28 Davisville bus goes there from Davisville Station, or the regular shuttle runs between the Brick Works and Broadview Station on this schedule.

The next event, the day after Canada Day, on July 2nd will feature liquid refreshment from Cheshire Valley, Kensington, and Black Oak and food from Rock Lobster and The Burger Bar. August 12th, September 23rd, and October 8th make up the second half of the calendar for 2012.