One of the things that is said to separate us from Europe and even other new world regions like is that we dont have a developed wine culture. Yes, we do have people who are as passionate as they are knowledgeable about local wine and would happily tell you what makes Niagara Riesling so special over a bottle and some snacks. But most Ontarians are happy to grab the first bottle with a label that catches their eye and be done with their host-gift obligations until the next special dinner or holiday. One Ottawa-based wine lover is trying the change that and hes turning to an unusual medium to do it. 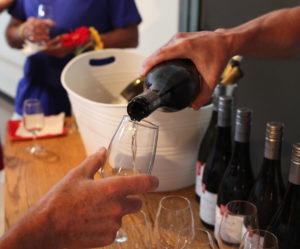 Shawn McCormick (@UncorkOntario) had been a long time passionate local wine lover and turned to Twitter in that last few years to keep tabs on his favourite wineries and also connect with people over one of his favourite topics. He was participating in a weekly Twitter chat centred around BC when a participant comment made him stop and think. It was from Jen Taylor (@littlemissmocha) and it asked why there wasnt also an Ontario wine chat. Knowing that Ontario has the largest wine industry in the country and is home to more than a few engaging personalities, it was a head scratcher and he didnt have a good answer. He mulled it over aloud, as is done in the twitter wine community, and made a commitment that if someone else wasnt going to take up the challenge, he would in the new year. Its now a year and a half later and both he and Taylor now co-hosts the wildly popular weekly#ONWineChat which sees hundreds of tweets from just as many participants.

The topics range from light (wine mascots and favourite wine books) to the technical and serious (ask a winemaker and should Ontario follow a Yellow Tail model). He and Taylor aim for a mix of topics and strive to bring together both consumers and the industry in the hopes of getting consumers learning and talking more about the wine made in their backyard. The tone of the conversation is welcoming, the topics friendly. Still McCormick isnt shy to tackle important and potentially controversial topic like the government-sanctioned process of a select few (pre-NAFTA wineries are allowed to blend finished or near-finished imported wine with a smaller percentage of local wine (International Canadian Blends) and still call it Canadian. “You might as well have those discussion in public and get both sides of the story,” he says.

McCormicks goal of raising awareness seems to be working. He was recognised with a VQA promoters award at last years CCOVI Experts Tasting for his community building. But what he prefers to point to is how the chat has grown into self-sustaining community with the majority of the topics now generated by chat participants.

MCCormicks more long term goals for the chat are see Canadian wine culture grow. Close to home hed like to see Ontario consumers match the passion and market share that BC enjoys for its wine. But ultimately wants to see a wine culture form where Canadians reach for a bottle of local wine first, then one from their neighbouring province with imports being a distant minority. Last year did his part issuing the great Canadian Wine Challenge, which called for participants to essentially only drink Canadian wine for a year and explore wine made from other provinces whenever possible. He also collaborates occasionally with #BCWineChat run by Tinhorn Creek owner and winemaker Sandra Oldfield whos encouragement and advice was particularly helpful in the early days. What would make McCormick even more happy would be to see a regular Canadian wine chat involving consumers and industry form Newfoundland to B.C. Ontario Wine Chat keeps him busy but if he finds some convincing co-conspirators like Taylor we just might be seeing a #CANwineChat and the start of a cross country wine culture with it.