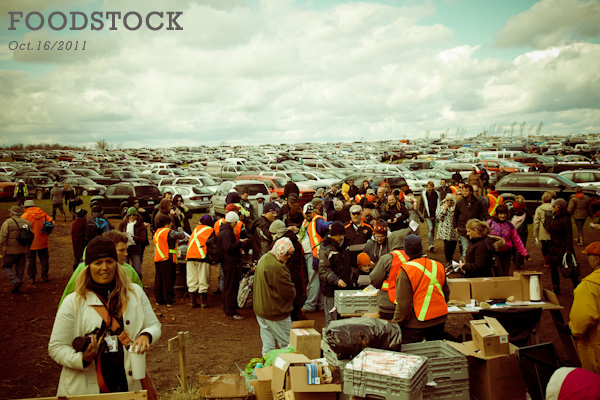 Cold winds, rain, a flat tire, hail and a painful lineup of cars didnt stop thousands from attending Foodstock today. Heres a quick recap of my experience at the event.

Foodstock is the brainchild of chef Michael Stadtländer, president of the Canadian Chefs Congress, who rallied chefs and cooks to host a culinary protest against a proposed limestone quarry in Melancthon Township (about an hour north of Toronto near Shelburne).

Rather than regurgitate what others have already said about the Mega Quarry, I will lead you to a few reference posts. Our own David Ort posted a preview of the event, which you can find here. The Toronto Star and CBC also have articles about the proposed quarry, and heres another on CTV. Then theres also this rant on Guelph Mercury by Owen Roberts.

After the event was announced two months ago it quickly started to gain steam partially due to the cause, and also due to the stellar lineup of chefs that Stadtländer had brought together. Over 20,000 guests were expected (tickets were sold online and at the door via a pay what you can model) to show up at the farm for the cause. 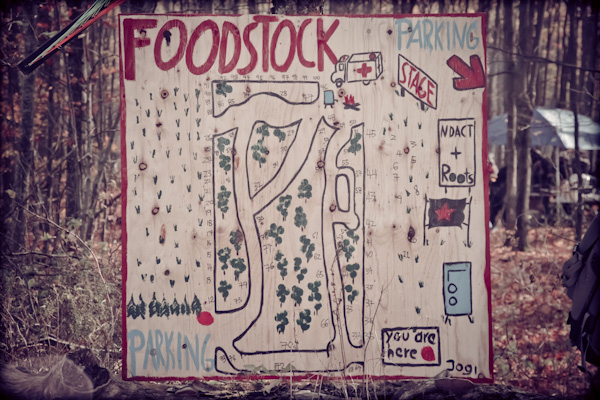 Knowing this, my group decided that we would leave Toronto early in the morning to catch Foodstock before noon. Our biggest challenge wasnt getting up to Shelburne, but rather the 45 minutes we spent escaping the claustrophobic clutches of the Scotiabank Toronto waterfront marathon which halted a number of major roads. When we arrived at the Foodstock site, a small army of volunteers quickly directed us to our parking spots.

We were 20 minutes early, and spotted a lineup at the gate, a hundred-strong, huddling together for heat, shuffling their feet and burying their hands into jackets as the cold winds whirled around. At 11am, the doors opened and guests with their own plates and cutlery in hand, were invited to explore the forest through a network of tasting stations. The layout and atmosphere was very simliar to Stadtländers Wild Leek Festival. My first bite came from the newl- opened Keriwa Cafe. Chef Aaron Bear Robe created fried green tomato bites with tomatoes from Vickys Veggies in Prince Edward County, and topped it with a sweet corn salsa. We followed that with tender, fried beef liver on turnip from Ruffed Grouse Bistro and oyster chowder from Oscars restaurant. Georgian Colleges culinary team served up maple caramel topped red fife blinis with roasted squash and wild apple compote. The team also served latkes topped with elderberry jam. Torontos La Petite France restaurant had a wonderful risotto of potato, lobster and herbs. My only criticism: a mouthful just wasnt enough, but wise considering we had over 50 food stations to taste through. A few minutes later, we were all raving about Nick Lius (Niagara Street Cafe) take on PBJ sandwichesbacon fat peanut butter and bacon jam squished between two small pieces of bread. It was incredible.

Further into the forest, the staff of Torito served a hot barbacoa lamb soup, along with tortillas stuffed with braised ancho chili lamb shoulder. Visiting the George Brown Chef School booth was easily one of my highlights of the day. A savoury and creamy acorn squash soup was served, filled with chunks of chicken confit and candied pecans. A medley of flavours and textures in a small cup. 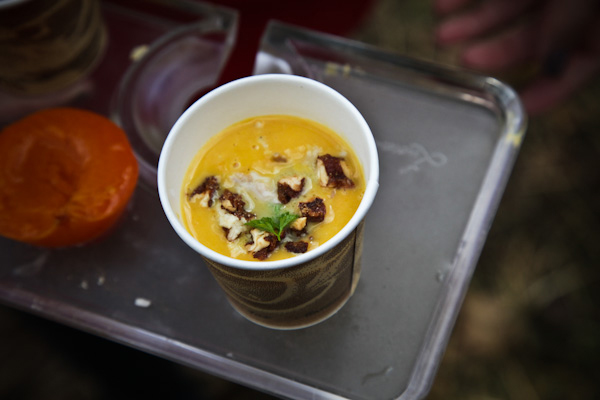 The second treat was Chef Oliver Li serving peaches that he had preserved in Ontaro Icewine, a treat so good we almost contemplated heisting the remaining jars. Of all the events that GB has participated in and I have attended, this was easily their best showing.

Scaramouche offered guests small buckwheat crepes stuffed with smoked salmon, cream cheese and chives, while neighbor Furusato of Barrie offered up a platter of various vegetarian sushi. Then came the pork in a variety of forms. Rodney Bowers (Hey Meatball) served meatballs with a salad, while Olliffe presented smoked berkshire sausage with a waupoos cider chutney. While the musicians took the stage, we sought refuge in the forest with Joshna Maharajs cornbread with spicy kale and onion masala. Easily one of my favourite bites, along with the pulled pork and flatbread wraps from Marben, and the spicy pork belly buns from the gang at Splendido, topped with a generous amount of kimchi. I finished with smoked artic char from Daisuke Izutsu, who recently closed his restaurant Kaiseki Sakura (Daisuke is currently preparing to open in a new location downtown), and Evelyns Crackers which were topped with chevre fromMonforte Dairy.

Early estimates indicate that over 28,000 attended Foodstock (Im sure an official number will be released in the coming days). When we left at 2pm, we saw a steady and long lineup of cars that were still waiting to enter the official parking lots.

Kudos to the entire organizing committee and all the chefs and producers that donated their energy and food for this cause. If you didnt have a chance to attend the event, I recommend that you follow the updates on the Facebook page, and even visit the restaurants that participated today to show them your support (you can see the full list on Toronto life).

More information about the Foodstock movement

(ps. in regards to the flat tire, Mike had some car trouble early this morning, but that didnt stop him from joining in on the picnic. Youre a rockstar Mikey.)